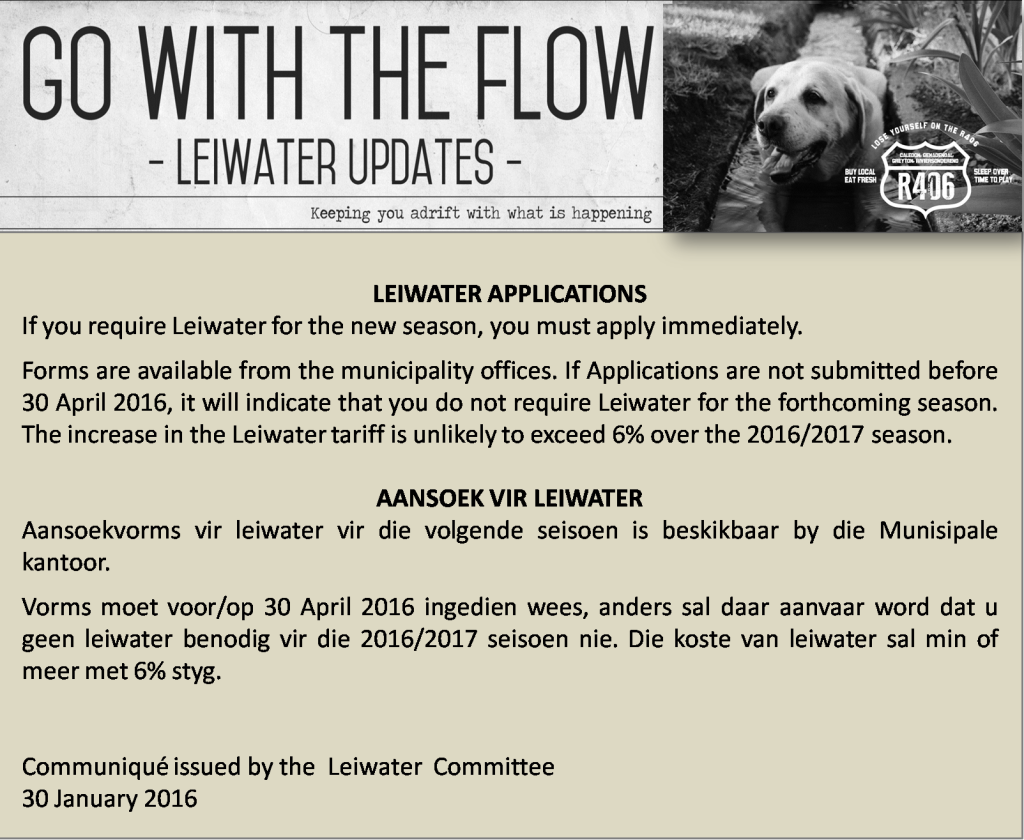 In terms of legislative requirements prescribed in NEMA, a public participation process (PPP) was triggered with the planning of the proposed borrow-pit for the mining of suitable gravel for the upgrading and re-gravelling of roads in the area, which is highly degraded and poses a safety hazard.

The proposed upgrades will ensure:

The proposed upgrade of these roads will positively contribute to the social, safety, and economic environment of the area.

In terms of the NEMA, public participation forms an integral part of the environmental assessment process. The public participation process provides people who may be affected by the proposed development with an opportunity to provide comment and to raise issues of concern about the project or to make suggestions that may result in enhanced benefits for the project.

The Ward 2 Forum has assessed the proposal and will be participating in the PPP, which will capture, evaluate and included in a comment on the outcome of our assessment.

Further Reports on this project will be published as soon as more information is made available.

Help us stop the proposed drop-off site at Greyton’s entrance and see our alternative to comprehensively address this and other problems.

It is – very it important that all residents of TWK Ward 2 (Greyton, Heuwelkroon, Boschmanskloof, Genadendal, Voorstekraal and Bereaville) attend this public meeting – so that we can stop the current TWKM plan wholesale nfl jerseys of turning Greyton’s entrance Holding into a waste drop-off zone.

We will also be presenting our Alternative Plan for Waste Management and our longer term vision for the area, for your consideration and support. We the need your input – this plan can only serve the needs of everybody if Wave everybody takes part!

Needless to say, cheap nba jerseys it is crucial that wholesale nfl jerseys all our voices are heard on this coolsculpting? and the only way to ensure wholesale nba jerseys that, is to FHU-Dickson attend this meeting.

The public notification of the intended alienation of portion of Erf 595 Greyton pertains.

For the Ward 2 Forum to make any meaningful comment and provide constructive input into the process off by the deadline of 19 February 2016, we have requested an extension of the deadline by an additional 30 days.

It appears from the above notification and subsequent correspondence from Janine Joorst of TWK, that Council had already decided over various details of the Espacio alienation of land, which suggests that the project had already been fully evaluated by TWKM, this in the cheap jerseys absence of any public participation process whatsoever. It must surely be evident that this is a huge and significant project, involving the sale of 235 ha of the Greyton Commonage for a paltry 4 million Rand, for “commercial farming”, with all sorts cheap nfl jerseys of potentially contentious issues for our communities and the environment.

It is also noted that BALL there is no record of any Public Notice on the Greyton notice board, which is understood to be a major requirement of a Public Participation along process as only a few people would have read the Gazette.

The Ward 2 Forum has requested additional information on the following:

We also request to be informed of the names and business affiliations of all the parties who made the proposal that TWKM considers suitable. As proper procedure prescribes that alternative land uses should be assessed comparatively, we also require full details of assessments of those alternatives examined by TWKM.

Unfortunately, all of the relevant information on this application is stated to be available for perusal only at the 北国新聞（2010年1月31日）にウーマンスタイル交流会が掲載されました。 municipal offices in Caledon. We requested that all information should be made available in the Ward 2 municipal offices, as this project is very important to wholesale jerseys all of Ward 2.

All information obtained in respect of the proposed alienation and ultimate sale of a portion (235 ha) of Erf # 595 will be made available via our website, Facebook page and a sent out to interested parties registered on our Database

Should you want to be placed on the Ward 2 Forum Database please request so in the form to the right of this post.