Herewith the last in the series of comments on the proposed alienation on the Portion of Erf 595 as envisaged by the Local Authority. What will follow hereafter is a Summary of the numerous comments as received from the Community in response to the articles as published by the W2F (Ward 2 Forum) team.

The full document as submitted to TWKM by the Ward 2 Forum Team will also be published for general information to the W2F database & on Social Media.

The following proposals are part of a larger concept that includes a considerable increase in the area of the Greyton Nature Reserve. The community of Farm 39 intends to register Bakenskop & potentially parts of Snyerskraalkoppe, to the West of Loerkop, as a Nature Reserve. This will eventually form part of the proposed Greyton/Genadendal Biosphere.

PROPOSALS FOR THE FRUIT FARMING PROJECT IN WARD 2 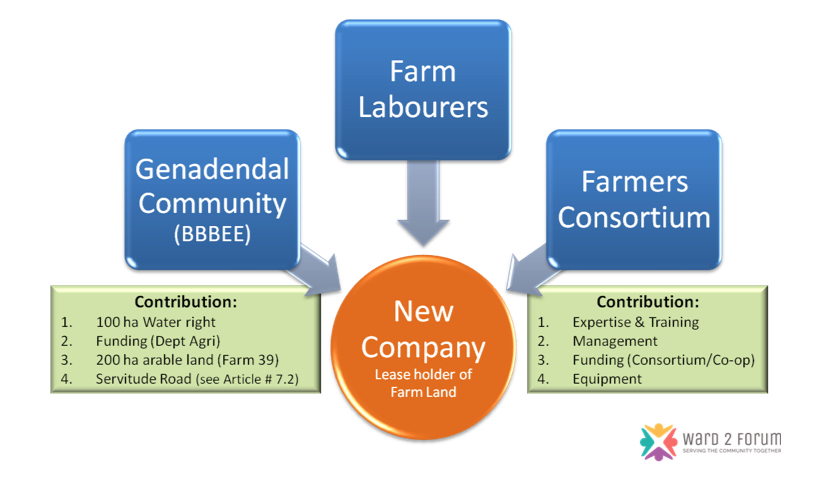 The grounds for objection to the alienation of portion of Erf 595, the Greyton Commonage, are considered a reasonable basis to allow the main parties concerned – TWKM, Consortium, and the Ward 2 community to contemplate an alternative outcome for this joint venture. W2F proposes that the Consortium, their labourers and Farm 39 (Genadendal) enters into a joint venture whereby:

The benefits for all the parties concerned are evident:

This alternative is an intrinsic part of our objection to the original proposal and as such should be considered together with the objection. This is the preferred concept from Ward 2 Forum, which is subject to modification and agreement between all parties concerned. There could be significant changes resulting from the EIA and the public participation process, from input from TWKM, the Consortium and Breede-Gouritz Catchment Management Area and after detailed discussions with the Departments of Agriculture, Land Affairs & Water Affairs.

Should you wish submit an objection to the proposed Alienation of the Portion of Erf 595 by TWKM please note these have to be submitted to TWKM, by latest 31 March 2016:

Address your objection to:

The submission can be handed in at the Municipal office in Greyton (DS Botha Street) or via Email to stanwa@twk.org.za, please ensure that you CC the following when submitting via email: